Whenever I suffer from writer’s block, the best antidote I’ve found is to give myself a new challenge. Rather than fixate on the project I want to be writing, I tell myself that what I’ll tackle next is merely an experiment. That’s how my first novel, Optics: A Novel About Women and Work and Midlife Muddles, came about. I was spinning my writing wheels, and I’d never written fiction, so I decided to explore unknown narrative territory.

Back in January 2021, when the new year felt like a rerun of the old, I was stuck. I wanted to start a second novel, but nothing was gelling. The creative silence was particularly frustrating because I usually am sorting through too many ideas rather than too few.

That’s when I decided to give myself another new goal. Instead of committing to an entire novel, I’d write a poem. Though I’ve written poems over the years, I’ve never publicly shared one before. But because many of us are doing things we never expected to, this seems a fitting time to publish a poem that may resonate with others.

One familiar constant amid our disruptive Covid-19 pandemic lives has been the cycle of the seasons—for those of us living in temperate latitudes. However, I haven’t been fully experiencing each season. Weather changes, and wildlife sightings vary, but the human interactions associated with calendar months are missing. No hiking trips with friends and family. No celebratory dinners. No people-watching in Santa Fe restaurants. No singing in choirs.

That last absence in particular provided a framing context for “Suspended Seasons in Santa Fe.” Though I’d sung in many choirs when I was younger—sometimes as many as three in a season—I’d just begun singing again a few years ago and had performed in only two concerts with a community chorus before the pandemic put an end to in-person rehearsals. I’ve been involved with a couple of virtual performances since the pandemic hit, but they’re a poor substitute for being surrounded by live voices. Writing this poem was a way to acknowledge that the seasons reliably complete their cycle, oblivious to interruptions in human social life.

Notes on the Form of “Suspended Seasons in Santa Fe”

In this pandemic poem, two cycles of four seasons, depicted in haiku, are suspended between two longer, grounding stanzas.

I chose haiku for its traditional connection with nature; typically, each haiku contains a word or phrase that indicates the season of the poem. In these haiku, we pass through two years in which the natural world’s rhythms continue as usual, while humans—though part of nature—are out of synch.

The first two lines of each haiku establish the season, usually with an image of nature or a seasonal event; the last lines evoke our individual and collective positions during the pandemic years of 2020 and 2021. The first fall haiku is a bit different, as I wanted to represent New Mexico’s complicated culture and acknowledge how the pandemic has affected native peoples more harshly. The Navajo have had a taboo about speaking of death, and they bury their dead as quickly as possible, but in Dia de los Muertos—an aspect of New Mexico’s Hispanic culture—the dead are remembered, represented, and death is seen as part of life.

Haiku is also unrhymed, which seems appropriate for a period that lacks a comforting cadence. Nothing feels complete right now—another reason that haiku’s quick images of a moment in time appealed to me.

The haiku are suspended between two longer stanzas representing Santa Fe’s constants of mountains and sunrise (we enjoy nearly 300 days of sunshine annually). The experience of suspension—of being stopped, delayed from doing something, of being held in suspense—is one I hope will soon resolve.

In morning we lie in mountain shadow;

We rise in song!

Life sits next to death.

Our breath turns to frost.

Life will return to normal;

We call in response.

In mourning we lie in mountain shadow;

We raise our song!

©2021 by Gail Reitenbach
All rights reserved. No reproduction in any form without written permission.

Don’t you just hate it when you start reading a book you think you’ll enjoy, only to discover a few chapters in that it’s not your cup of tea? It’s either more like a mug of weak church coffee or a shot of mescal.

Maybe you’ve had that experience with a book labeled a classic, best-seller, or award-winner. If the title was assigned reading for a class, you probably slogged through to save your grade. If your book club chose it, you might have skimmed the pages or skipped to the final chapter. But when you buy a book for your own entertainment or edification, you want a higher degree of confidence that you’ll like it. (For mass market maybe books, the library can be a safer bet.)

That’s one of the reasons I gave Optics a descriptive subtitle: A Novel About Women and Work and Midlife Muddles. Turns out, that may not have been explicit enough. Comments from a couple of pre-publication readers suggest that they were expecting something different from the book—specifically, romance.

I didn’t think anything in the title, subtitle, or back-of-book marketing blurb would lead readers to expect a romance plot, but I may have underestimated the power of the romance genre to shape expectations.

This story on Bustle, “Who Reads Romance Novels? Infographic Tells All,” is a few years old, but the data are probably similar today. Nielsen BookScan, which collects book-related data, found that in 2015, young, white women constituted the largest reading block (59%) for romance novels; readers over 45 were 40% of the market. Now think about every sort of fiction genre published—from literary to fantasy and from historical novels to mysteries. In 2015, nearly one-third of all fiction titles in all formats—29%—were romance novels. That’s a powerful percentage.

My concern about Optics potentially being misidentified as a romance doesn’t come from a place of intellectual disdain. The best romance writers are professionals in every sense; one of my fellow graduate students earned her PhD in English and promptly began a successful career as a romance novelist. And romance novels aren’t necessarily shunned by the supposedly intellectual elite: One of my English Department colleagues in my first academic job frequently reported, with no shame, that she relaxed with “bodice-rippers.” Then there’s the business side. The writing and selling of romance has helped thousands of  women support their families, and I’m all for women’s financial independence.

My challenge is alerting potential readers that Optics isn’t a romance novel. Well, one subplot does have a romance element, but it certainly doesn’t drive the main plot. Social media is one way to reach readers, so I created a couple of tongue-in-check Reader Advisory graphics to post on Facebook and Instagram. They’re designed to acknowledge the pervasiveness of romance plots and the odds that a reader will be younger than my book’s main character. 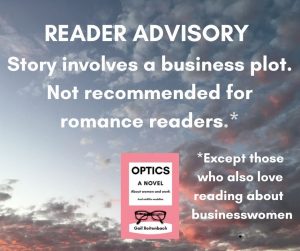 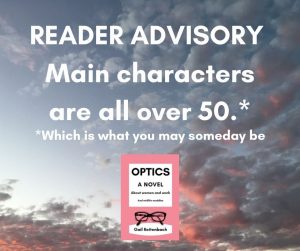 To be clear: I want Optics: A Novel About Women and Work and Midlife Muddles to sell as many copies as possible. I’m not trying to drive away potential buyers. Instead, my Reader Advisories are intended to guide readers to a book I hope they’ll enjoy and tell their friends about. Who knows, maybe a few forewarned romance readers will be curious enough to read Optics and will love it. After all, the reviewer at the San Francisco Book Review called it “a perfect beach read,” so you know it’s not self-consciously literary. (You should be able to find the review online in a week or two after they batch-upload the latest reviews.)

The assumption that Optics might focus on romance isn’t just influenced by the overwhelming number of romance titles in the marketplace. It’s also aided by industry categorization.

Marketing in the book industry—whether you’re dealing with a book published by a Big Five traditional publisher or an indie publisher—is driven by metadata (data that provides information about the title). An essential piece of book metadata is the genre category or categories. Traditional print book distributors, bookstores, and online retailers use slightly different lists of categories, but they typically use the same big buckets. Those big categories help both physical and online booksellers group any given book with similar books so browsers can find what they’re looking for. But the more specific your category, the higher the probability that someone interested in just the sort of book you’ve written will find that title. Such a category does not exist for Optics.

Perhaps one day BISG will amend its list to include a category that better fits Optics: A Novel About Women and Work and Midlife Muddles. In the meantime, I wrote the book I couldn’t find to read, and I hope others will discover in Optics what they’ve been looking for. 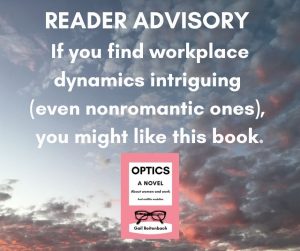